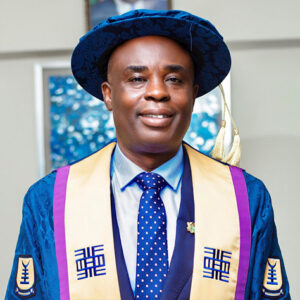 Vice-Chancellor of the University of Professional Studies

Professor Amartey is a product of St. Thomas Aquinas Secondary School, Accra and Prempeh College, Kumasi. He obtained his Ordinary Level Certificate from St. Thomas Aquinas Secondary School in 1986 and Advanced Level Certificate from Prempeh College, in 1988. He further obtained a Bachelor of Arts (Economics major) in 1992 from the University of Ghana. In 2003, he obtained his first Master’s degree, a Master in Business Administration (Marketing Option) from the University of Ghana Business School. In 2009, he enrolled at SMC University in Switzerland for a Doctorate degree and on completion of his coursework in 2010, he pursued his second Master’s degree, Master of Philosophy in Marketing, again from the University of Ghana Business School and completed in 2012. He subsequently continued with his thesis at SMC and graduated in 2014 with a Doctorate degree in Business Administration. He also holds a Professional Marketing qualification from the Chartered Institute of Marketing (CIM), UK.

His publications in the journals Computers in Human Behaviour and International Journal Contemporary Hospitality Management make him one of the few Ghanaian marketing professors who has ever published in ABS three-star journals.

He is an ardent charismatic Christian and a Minister of the Gospel of Jesus Christ and worships at the Revival Outreach Church. Professor Amartey hails from La in the Greater Accra Region and is married with three children. 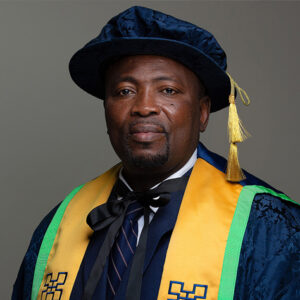 Pro Vice-Chancellor of the University of Professional Studies